Mahamrityunjaya Mantra Meaning | It’s Benefits | How to Chant the Mantra

Introduction to the Fearless Realm

MRITUNJAYA – The one who has transcendent death. It is the another name of Lord Shiva. It is also called Mrita-Sanjivini mantra because chanting this mantra restores life and prevent us from diseases. This mantra is an ode to the supreme yogi, Shiva. He is the absolute truth, The Transcendent Lord. The one who is beyond the consciousness, subconsciousness, dream and waking state of a human being. Our ancient Vedas are a package of knowledge, healing and life restoring powers. The mantra itself is actually comprised from mantras which are found in the three Vedas: The Rig Veda (7th mandal, 59th chapter, 12th mantra), the Yajur Veda (3rd chapter, 60th mantra), and the Atharva Veda (14th mandal, 1st chapter, 17th mantra). The mantra is divided into four lines, each containing eight syllables. The combination of sounds that are embedded in the mantra, if chanted regularly liberates a human being from the cycle of life and birth. Hence, its other name ‘Moksha mantra’.

Meaning of the Mantra:

Meaning: We worship the Three-eyed Lord who is fragrant and who nourishes and nurtures all beings. As is the ripened cucumber freed from its bondage (to the creeper), may He liberate us from death for the sake of immortality.

Legend behind the Mahamritunjaya mantra 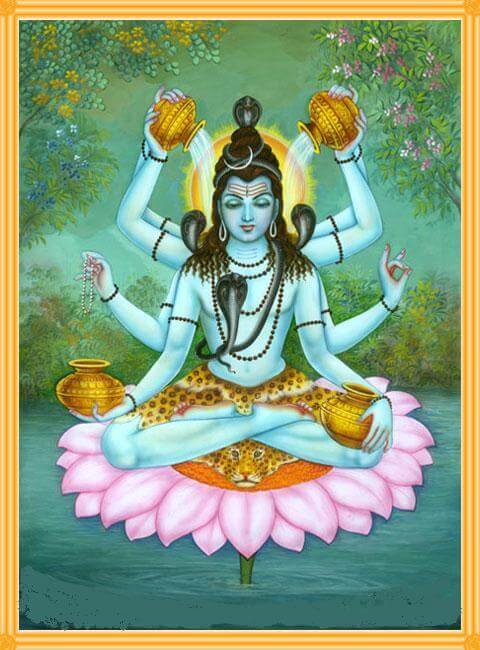 Sage Mrikandu and Marudmati, his wife were childless. They took a long penance to please Lord Shiva so that, in return he may give them the boon of a child. Everything went as planned, Bholenaath got pleased but gave them two choices. An intelligent son with a short life or a son with low intelligence but a long life. They chose the former option. They were soon blessed with a son, who was named Markandeya but he could only live for 16 years.  As his 16th birthday was approaching, they were becoming depressed and revealed the whole story to their son. He started his penance to please Shiva.  On his 16th birthday, Lord Yama to take his soul but he was engrossed in deep meditative state. Yama tried hard to take away his life. On seeing this, Shiva became angry and killed Yama. The universe got disbalanced and asked Shiva to grant Yama his life, so he did but only on one condition that Markandeya  would live forever.

Why to chant this mantra?

How to chant the mantra:

The ideal time to chant the mantra is between 2-4 am. 4 am is called the Braham muhurat. It is believed that knowledge grasping ability increases at this hour and the powers of devdas can be invoked. This mantra can be chanted individually or in groups. Whatever way you may be choose, remember that each word should be pronounced correctly and your focus should be on the meaning of the mantra while chanting and it has to be chanted with utter faith, then only can it give you desired results. You can use rosary to keep a track on how many times you’ve chanted. It should be chanted 108 times. You’ll be at peace after chanting and you will feel an energy shield or bubble created around you that you have you take along everywhere you go and take everyone you meet within the shield.

Make this mantra, the mantra of your life.